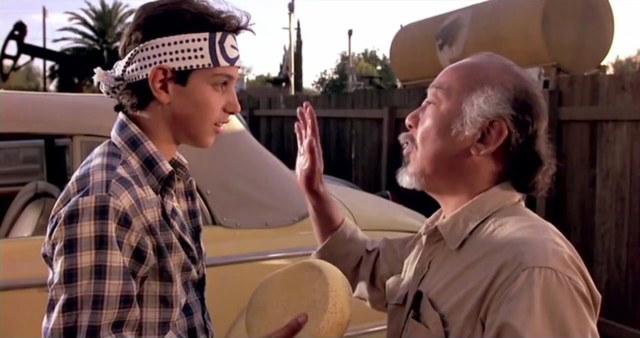 A TV historian said that before Conan the Barbarian, “We knew the hero was big and strong because the script said he was.” He felt that Conan was the first attempt Hollywood had made to actually make the big strong hero look like a big strong hero. Rocky gave us the training montage. Before Rocky, we didn’t know why the hero was able to beat everyone up. Now we know, it’s because he does one-arm pushups, chases chickens, and runs up and down the steps of the Philadelphia art museum.

“If a man dwells on the past, then he robs the present. But if a man ignores the past, he may rob the future.” The 1972 Kung Fu TV show was the first martial arts media to show the philosophical or spiritual side of martial arts.

“Win, lose, no matter. You make good fight, earn respect.” Pat Morita claimed that he “invented the sensei character.” While Master Po and Master Kan who taught Kwai Chang Caine in Kung Fu predate Karate Kid, Mr. Miyagi became a household name and a standard which influenced most of the movie senseis who came after him. The Karate Kid was also the first movie to truly explore the relationship between teacher and student. “No such thing as bad student, only bad teacher. Teacher say, student do.”

A TV writer referred to Karate Kid as the first movie that is actually about Karate. Martial arts movies have existed for over half a century, but the term martial arts movie really means fighting movie. Most of the martial arts movies up till that time were just one long fight scene. Karate Kid was about the student’s journey of discovery. In the film, we see how karate helps Daniel Larusso develop and grow as a person.

“Daniel: So, karate’s fighting. You train to fight.
Miyagi: That what you think?

Daniel: [pondering] No.
Miyagi: Then why train?

Daniel: [thinks] So I won’t have to fight.
Miyagi: [laughs] Miyagi have hope for you.”

“I’m not a big fat panda. I’m THE big fat panda.” Kung Fu Panda delivered an extremely positive message that each of us has great things hidden within us. We are all The Dragon Warrior and all we have to do to uncover the power of awesomeness is to recognize it. “To make something special you just have to believe it’s special.”

Finally, Kung Fu Panda III, when Po discovers that he must become a teacher in order to save the panda village, Master Shifu tells him. “You must take the next step on your journey, from warrior to teacher.” This was the first movie to ever deal with the transition from student teacher which completes the martial artist’s journey.