“A true champion is one who sweats from exhaustion when no one is watching.”
Bas Rutten, former UFC Heavyweight Champion and three-time King of Pancrase.

People are always looking for a shortcut to success. In martial arts, there have been many scammers, selling “the secret” to becoming a great fighter, knowing the average person would rather invest money, than time and sweat, in improving their skills.

Reading up on some of the fighters I admire most, they had several things in common; hard work, discipline, determination, heart, and a no-quit attitude. But while many martial arts talk about all of the above, a unique aspect to fighters is that they actually fight. And none of the fighters I researched cited a secret technique given to them by an old man in a cave as the root of their success. But many martial artists continue to search for the easy fix, the secret to fighting, but the secret to success at anything is as easy as this quote from seven-time Mister Olympia Arnold Schwarzenegger “Work your ass off there is no magic pill”.

In a motivational speech which is available on Youtube, Arnold cited scheduling and discipline as being major factors toward success. When he first moved to America, Arnold said that he “worked in construction. I went to college. I worked out in the gym, and at night, from 8 o’clock at night to 12 midnight I went to acting class four times a week. As I did all that, there was not one single minute that I wasted and this is why I’m standing here today.”

Arnold said about Muhammad Ali, “Mohammed Ali worked his butt off, and I saw it firsthand… there in the gym and he was working out he was doing sit-ups and I asked him how many sit-ups do you do? And he said ‘I don’t start counting until it hurts.’” 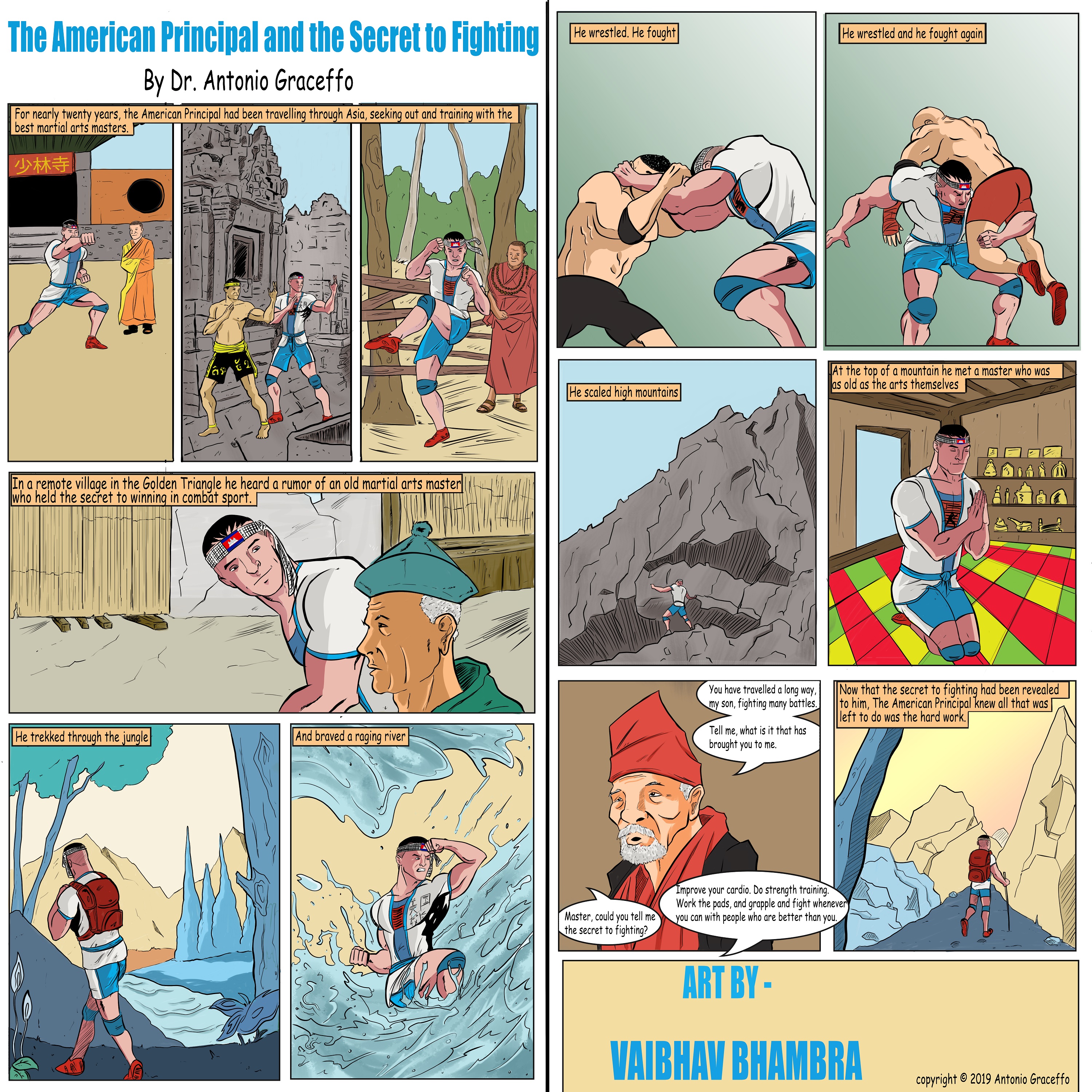 Muhammad Ali was an Olympic gold medalist and a three-time heavyweight professional world boxing champion. Calling himself “The Greatest of All Time,” several of his fights have been recognized as some of the most significant in boxing history: “Fight of the Century” and “Super Fight II” both against Sonny Liston, the “Thrilla in Manila” against Joe Frazier; and “The Rumble in the Jungle” against George Foreman.

In Muhammad Ali’s own words, “Only a man who knows what it is like to be defeated can reach down to the bottom of his soul and come up with the extra ounce of power it takes to win when the match is even.”

Another of my martial arts heroes is kyokushin karate founder, Mas Oyama (1923 to 1994). Far from looking for “the secret” Mas Oyama dedicated himself to harsh physical training and fighting. Nicknamed “The Godhand”, Mas Oyama is credited with having completed a 300-man kumite, a fighting competition whereby he fought 300 men, one at a time, over a period of three days. He said, “One becomes a beginner after 1000 days of training.”

“Judo” Gene LeBell (born 1932), holds a 9th degree black belt in jujitsu and a 10th degree, red belt, in judo. He won the AAU national judo title twice, in addition to winning professional wrestling titles. As a stunt man, he has worked in over 1,000 movies and TV shows. Gene began catch wrestling training under Ed “Strangler” Lewis at age 7. His judo training began at age 10, and eventually lead him to training at the Kodokan headquarters in Japan. In 1963, he is credited with having fought in the first ever, televised MMA fight, when he took on boxer Milo savage, eventually winning by rear naked choke. He later served as the referee in the infamous 1976 mixed bout fought between Muhammad Ali and Japanese wrestler Antonio Inoki. He was honored with the Frank Gotch award, in 2005, for his contributions to wrestling. Today, he is still active in teaching and has been heavily involved with the training of MMA champions, Rhonda Rousey and Josh Barnett.

Gene Lebell, a man who has trained and worked constantly in martial arts for over seven decades said, “People think they can take a pill and become a champion. But the harder you work, the luckier you get. You have to work a move hundreds or thousands of times.”

Legendary wrestling coach, Dan Gable (born 1948). As a wrestler, Dan Gable won Gold medals in the 1972 Olympics, 1971 Wrestling World Championship, and the 1971 Pan American Games. A two-time NCAA national champion, he graduated university with a record of 117-1. As a coach, He coached 152 all-Americans, 45 national champions, 106 Big Ten Champions, 12 Olympians, including eight medalists. Additionally, he led his teams to 21 Big Ten Conference championships, and 17 NCAA Division I titles. He has been the head coach of three Olympic teams and six world teams.

When Dan Gable was 15 years old, his sister was brutally murdered. Rather than allowing that tragedy to destroy him, he used it as motivation to train even harder. Having experienced such a deep loss would be the toughest thing most people would ever have to endure, and yet, Dan Gable said “Once you’ve wrestled, everything else in life is easy.”

“You don’t quit after you get beat. You pick yourself up, and you start rebuilding to achieve your goals.” Daniel Cormier

Daniel Cormier held both the UFC heavyweight and light heavyweight titles simultaneously. Previously, he had been Strikeforce Heavyweight Grand Prix Champion and King of the Cage Heavyweight Champion. As a wrestler, he took gold in the Pan American Games and twice took gold in the Pan American Championships. He was a two-time Olympian, 2004 and 2008, and won the senior U.S. national champion every year from 2003–2008. Additionally, he was crowned the only champion of the now defunct, Real Pro Wrestling league.

Never looking for a secret or an easy way to victory, Cormier said, “My confidence comes from my fights and my training.”

“Who I have fought and how I have fought, it says a lot about me.” Daniel Cormier
Manny Pacquiao, (born 1978) is currently serving as a Senator of the Philippines. His amateur boxing record was 60-4, while his professional record is 61-7-2. In the history of boxing, he is the only eight-division world champion. He has won a total of eleven major world titles. Manny’s “secret” seems to be hard work and perseverance. “Anyone will succeed in whatever field of endeavor in life by acquiring the same virtues and character that boxing world champions do – dedication, perseverance, courage, extreme self-discipline and prayers.” Manny Pacquiao
“Fearless is getting back up and fighting for what you want over and over again, even though every time you’ve tried before you’ve lost.” Manny Pacquiao

“I don’t care the rules you want me to fight under, just tell me where, when, what weight, and how much you’re going to pay me and I’ll show up & show you a prize fight.” Will “The Kill” Chope, who has had over 110 professional fights in MMA, boxing, muay Thai, boxing, lethwei and bareknuckle boxing.
“Time on the mat will eventually surpass talent and ability.”
Gracie Mag

“Boxing is about being hit rather more than it is about hitting, just as it is about feeling pain, if not devastating psychological paralysis, more than it is about winning.” Joyce Carol Oates
One could go on and on with quotes from famous fighters, but the consensus seems to be that the secret to fighting is a combination of hard work and perseverance, paired with a willingness to experience pain, loss and failure repeatedly to finally achieve victory. And just to bring this article full circle, Arnold Schwarzenegger would tell that that is the secret to success not only in fighting, but in life itself.