Research in the field of Spanish fencing lead by Grand Maestro Oleg Maltsev is in continuation. One of the programs of the “Science of Victory” episodes in the framework of “Lies and Truth about martial arts” project was devoted to a review of Spanish fencing, as well as the results of the scientific expedition to Spain.
The question about the year of fencing’s origin is controversial. Nevertheless, by turning to works of Blasco Florio, who himself had approached the research with great care, it can be seen right on the second page of his last Neapolitan treatise that the first documents on fencing appeared in 1474. According to this, it is considered to be the birthplace of fencing is Spain, but the word “fencing” itself has German origins; which is concluded in relation with documents on fencing, preserved up till this day. In the field of fencing Spain is “documented” as an outmost in its efficiency, but in fact many other schools are not inferior either. At that period of history Venice, Genoa and other World Powers had already existed to conquer many territories by force of the arms.
Considering year of 1474 as a starting point, it should be noted that the first works on fencing in Spain were about rules of interaction between the two fighting sides.
1582 – “Philosophy of Arms” treatise of Jerónimo de Carranza.
This is about the philosophy of weapons and its application but not about how to fence, it is a book is a scientific treatise on Destreza.

The treatise is directly related to the works of Pacheco de Narváez and the subject of Destreza. The Order of Saint Santiago was founded in the XII-th century (1151) and it is exclusively Spanish, that is, only Spanish knights could become its members. Besides, the Order itself is considered to be the founder of a criminal tradition in Spain. 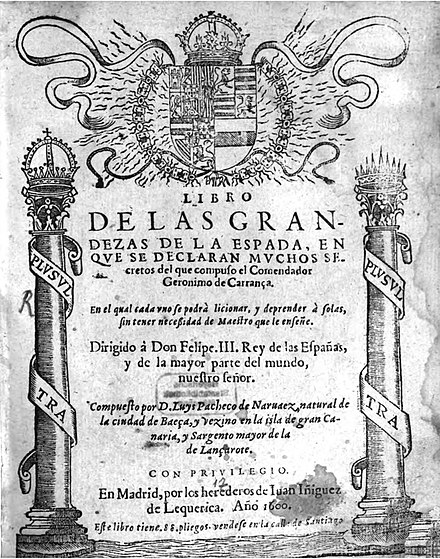 This textbook is designed for very high-level masters and is meant to being their skills to a higher level. If you are not familiar with the work “Greatness of the sword”, then it will be extremely difficult to grasp this one. 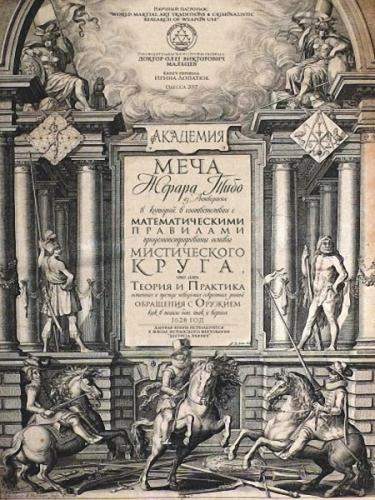 “The Academy of the sword” (Gerard Thibault)

1696 – “Guide and light of the true Destreza” of Pacheco de Narvaez and Nicolás Tamariz.

Nicolás was a knight of the Order of Saint Santiago.

Besides, according to classical history the Spanish school made some Italian masters, such as Salvator Fabris, Camillo Agrippa and others.

Talking about the Order of Saint Santiago which was visited by Dr. Maltsev during the expedition, this organization was initially called “Brotherhood of the sword”, and today its name sounds as follows: “The great military order of the sword of St. James of Compostel.” As far as you can see, the sword is initially mentioned in the title, because this is what united the people who created the Order. An interesting fact is that Pacheco de Narvaez and Jerónimo de Carranza belonged to another organization that was called the Order of Jesus Christ. For a long time, this Order remained unknown because of its Portuguese origin. According to classical history, the Order was established by the King of Portugal in 1318 and arose later in the XIV century.

Since then large number of fencing sources were created by the Order of Saint Santiago.
The Order of Jesus Christ subsequently became a direct factual and spiritual successor to the Order of the Knights Templar after their liquidation. Moreover, in the documents it is written the following: “Pope John (Roman) allowed to transfer the Order and all the possessions of the Portuguese Templars, including the castle of Tomar.”
Hence the second name of the Order is “Tomar”.

Why are we talking about these two orders? As you can see, they were the ones who created such great authors of treatises. In 1696 first joint work of the Order of Saint Santiago and the Order of Jesus Christ “Guide and light of the true Destreza” saw the light. In the same period of time, students of Pacheco de Narvaez wrote five more treatises, detailing and commenting the five sections of the book “Greatness of the Sword” written by Pacheco de Narvaez. One of the most important treatises is the book of D. Manuel Cruzado and Peralta, Luis Pacheco de Narvaez “The tricks of vulgar and common fencing only with sword and pair weapons, which are rejected by Luis Pacheco de Narváez, and the opposition of the true Destreza.”

The most interesting fact is that 30 tricks of commoners described in this book do not correspond to the 30 tricks described in the treatise “Greatness of the sword”. The reason is that a student collected the tricks of commoners of his period of time, and the book itself was published in 1702, that is, only 100 years later. Obviously, such aspects are interesting for comparison.

If one adds to all works that were mentioned above the Neapolitan and Palermitan fencing styles, the list of techniques that exist in the Canary Islands to this day, work with three types of knives (Navaja, Canarian knife and stone knife), fencing with sticks (training knight fencing), Spanish fist fight, national species fencing with a falcon or a long knife and with a poncho in one’s hands, a long stick with a stone at the end and an razodero (Spanish hook), then such a huge teaching uniting all this knowledge of different techniques is called Spanish fencing. As you can see, a talk about Spanish fencing is extensive. It should be mentioned that in some parts of Spain this kind of fencing was preserved in its original form.

This is how geometry of Spanish fencing looks like, which we will study with a demonstration work with various weapons in more detail. Later, the nature of the movement and the origin of fencing will become clear because things do not just appear from nowhere and technology is justified by specific scientific aspects.
In particular, our next articles will be devoted to these questions.