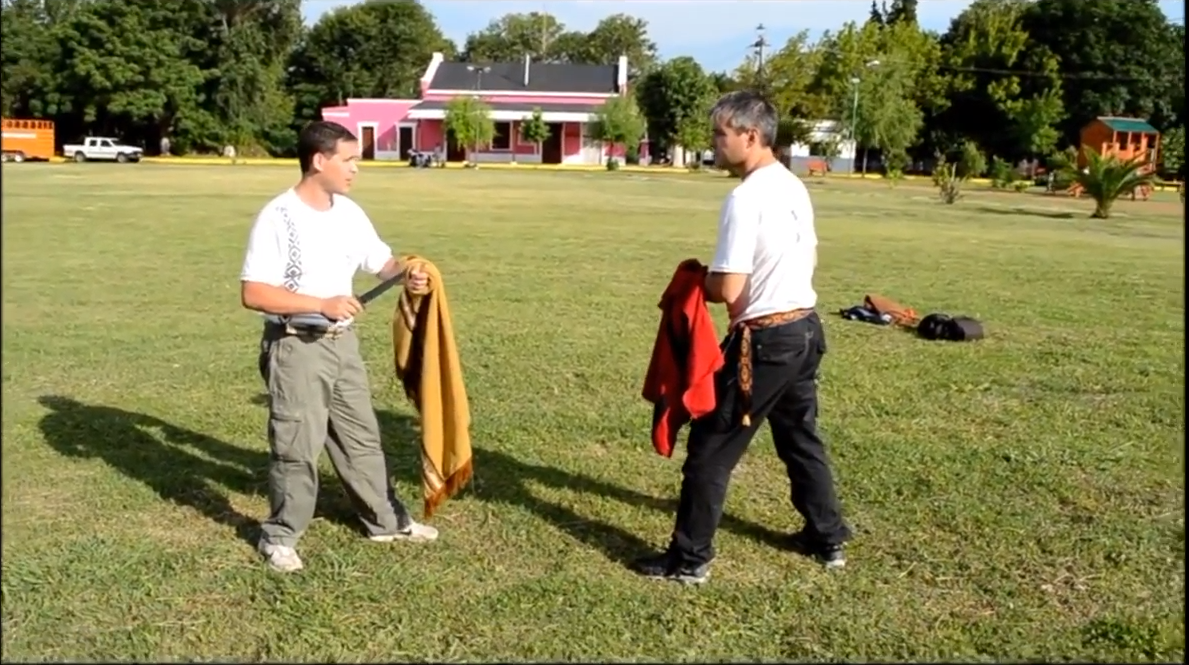 First of all it is necessary to find out why the fencing is called a Creole one. At the beginning of XVII-XVIII century at the turn of the war of Independence in Argentina the name of this type of fencing was given by Creoles, being descendant of the first colonialists immigrants in South America. These are  gauchos who are called also the Argentine cowboys. Such type of fencing intended two persons and was called “creole” or “visteo” (what means “game” or “technique of fight”). Primarily this type of fencing had no accurate definition, but in the XX century it was called Creole fencing and eventually the decision has been made to leave such name, as it was the most widespread.

In Creole fencing bladed weapons are used, the basic weapon is considered long and short knives. A short knife – the most prevalent form of knife as it is applied not only in duels, but also universally in the household purposes – in the kitchen and for work. In rare instances the knife, slightly bigger by size, is carried sideways, but this option of carrying is not widespread in Argentina. Such knife is used for the attack. The big knife “facon” can be carried behind the back blade down.

In Argentina very popular adage: “Get a knife only when you are going to use it”.

In case of fencing the short knife is considered convenient and fast in use therefore it is carried around always and everywhere. If between people there are any disagreements, they get such knife and with it helps resolve all issues.

The long knife fairly inconvenient. It is inconvenient to get him as well as to carry at itself in everyday life. Such knife can be applied in case when, for example, two persons have decided to sort out the relations and somewhere have retired for a serious duel. The person in whose hands the long knife has big advantage in comparison with the person who has a short knife.

As technical element, it is correct to hold a short knife by Creole hold when the thumb is held on an edge. The movements happen generally by wrist, at the same time the movements have to be cutting. Due to the movement by wrist blocks all the angels of the possible attack. Also the pricking movements are applied – such technical element is called “chuzaso”, and technical element of punching blows – “punto taras”. Such type of blow from the below up as “achudar” more widespread in street fights and is considered more effective than the direct stroke used in other martial arts. Side winders on both of sides are also punishing in the direction from below up. The edge of the knife is always directed on a diagonal line to opponent to provide the review and to see the opponent without losing him from a field of vision. At the same time blows are struck to the area of an ear. It is possible to hold a knife diversely, which would be from below, from above, also possible to take steps to approach the opponent.

How it is possible to protect oneself from such kind of blows? Cutting movements are used in defence. It is necessary to look for mistake of an opponent and use it to deliver him a strike. For example, if an opponent has grabbed a hand, it is possible to cut hand with a knife. As an additional element of protection it is possible to use poncho, having reeled up it on a hand, but it is desirable to find a thing person will be keeping in hands. It should By the way, without the second weapon in a hand the low position is unprofitable as the opponent can strike blow from top to down.

It is necessary to move standing by such principle: if one leg goes forward, then the second – has to move behind it; at the movement aside chasse steps are used, and legs are never crossed.

The stand with a short knife mostly on high level , but there is a variant with lower level. Dangerous to be on a close distance. On an average distance is safer and allows to make maneuvers, to steer clear. With the availability of a distance with the opponent it is possible to take lower position, if there is a protection in a type of weapon in other hand. Without the second weapon the distance needs to be increased.

Now, a small talk about Creole criminal tradition. It is similar to classical Creole fencing, but  has undergone some changes. In the criminal technique are used poncho, a long knife – “facon” and a short knife – “daga”. Also the long nail is applied, which is called “22” (as caliber of a small gun) and allows to strike the pricking blows. In prison such nail can be got from a wall. It can be ground about a wall, then to roll up in a piece of a poncho and to fix by threads. This nail is called also “pareri” due to the place of it extraction (wall). Duels always have been in prisons. Before the duel “punta” (“end”) of this nail also moisten with garlic juice. When such nail pierce the opponent, the blow turns out very painful.

There are own rules of a fight. Creole fight is always a duel one on one. If, of course, it is an duel of honor.

Creole fencing – one of the few directions in the martial arts which have kept technique of appliance of such variety types of weapons. In Europe as a rule they have used stick and knives. And if to compare with this type of fencing the Spanish fencing, then will see that its are not similar due to different positions and technical elements. For example, in Creole fencing at the attack it is possible to use a hat. In earlier times only cold weapon was used, later instead of it began to use firearm.

Quarrels and disagreements between people was most often caused by existence of underclass (the poor people, workers) who worked in ports and public institutions, and capitalists who had a lot of money. Quite often between therm was skirmishes that was a reason of the serious conflicts.

More details about a long knife “Facon”. At the beginning of a duel the knife can be held having exposed a thumb on an edge or having clasped with the second finger to a cross-guard. The movements have to be cutting and at the same time at a close distance it is never impossible to move down a hand, possible to do it only at a long distance.

As for a stand, being in a fight, opponents shall hold a distance to see further actions of the opponent. Being close, the opponent will try to strike the cutting blows that is required to be excluded. “Facon” can be rotated in different directions. Blows are struck by means of a wrist, and by means of an elbow or a shoulder. But after swing from a shoulder it is necessary to strike immediate. If at this moment to lead out a hand back, it can lead to a fatal outcome.

What kinds of the classical blows by “Facon” exist, characterizing only this knife?

The move “hachazo” represents blows forward and in the opposite direction. Blows “bajatripas” are struck the belly. “Chuzaso” – blows by punt. “Hachazo asiro” – blows by the cutting part in the direction below up. “Planazo” – blows by a flat part of an edge flatwise. “Chusazo” – a kind of the pricking blow, herein blows are struck in the opposite direction, just as blows “hachazo”, only by cutting part of the edge. And, at last, the movement is the cutting blows when its described drawing the loop in air. You should not forget about a poncho – it has a safety function in a duel.

The criminal tradition uses “facon” and a whip (bolas). The whip applied for fight at a long distance in order for enter to a duel with the swing movements. From where in this tradition has appeared appliance with whip? The matter is that the whip was used for leading of horses and therefore it often was near at hand. It is possible to apply it in two ways. The first way – to hold for a stick and to work with whip. Here there are two types of blows; it is used if there is no task to kill the opponent (also he can be disarmed by whip). The second way – to hold for a whip and to strike blows with a stick.

At a duel the following pair combinations of technique elements are used: the poncho and “facon”, a whip and “facon” and also “facon” and missile weapon “boleadoras” (two balls on a long rope), and in the XVIII century still was used “facon” in combination with a sabre.

Fakon is the main knife used in fights. However it has configurations. This weapon or with one cutting part, or with addition of the counter-cutting part, much bigger size – then it is already a knife “caronero”. “Chinco”- is a small knife which name comes from a phrase “the little son”. “Chuza” – a knife which put on on a spear as a punta and keep it by creole hold, it is also used to cut sheep. In earlier times the spear was applied by aborigines. Its length was 2-2,5 meters. At the present time use a spear about two meters long.

For a training there could be used games with a stick “visteo” – the predecessor of Creole fencing. It is possible to work with it at a long distance from below up and circular motions. Also applied rubber or wooden knife for not to wound itself and the partner during the training exercise.

It is necessary to understand that the Creole fencing was created not at once. Original was used only a knife, but there are regions where different types of weapon are used. For example, there are people using missile weapon “boleadoras”. But generally in Creole fencing are applied all kinds of weapon.

If to speak about history, than original “facon” was used in duels. It was the main type of weapon which was used in most cases in view to the fact that it provides more advantages before the opponent. Original Indians used missile weapons “boleadoras” and a spear “chuza”. In the XVIII century soldiers used a saber, and in cases when it was broken during the fight with the opponent, the piece of metal was applied and in process of time obtained shape and the name “facon”. One of especial characteristics of “facon” is the conical shape of the handle. In length of time, in process of appearance of different types of weapon, produced various combinations, combining several kinds of weapon in one. Perhaps at this point we complete our first acquaintance  with such surprising direction as the Creole fencing which has kept in itself a lot of traditions. Today, it is quite difficult to find the direction of martial art which would assume appliance of such a variety of types of weapon.