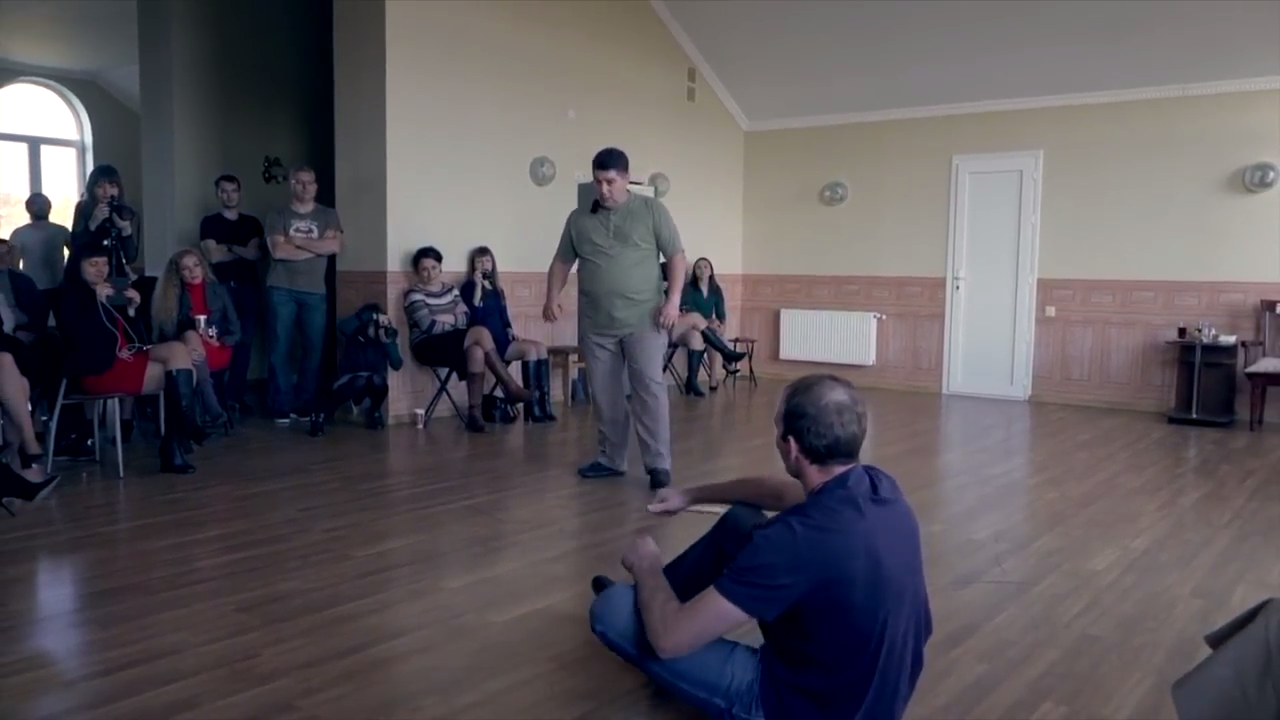 Within the framework of a closed seminar which was visited by a group of our journalists, Grand Maestro Oleg Maltsev has touched upon a very important topic in the field of martial arts and demonstrated a unique technique of uncompromising defense with bare hands against the knife. How does this happen? Is there a possibility to defend yourself in such a situation?

If one keeps his hand in a relaxed state it is quite difficult to do something with him, that is why in order to control the body of an opponent, it is necessary to make his hand tense. Once an enemy’s “electric circuit” is “closed” one may drop him down. No matter how strong an opponent, the more his mass is accelerated, the faster he is going to go down. When you use your fist and knife for a hit, the technique is going to stay the same – in both cases you will need to unbend your arm, the other case will be a “logical model”. It is enough to lock “electric circuit” of a man by means of tension to make him lose balance and “transform” into a single construction, after this is done one may do anything with a victim.

What else one has to know while using a blade? For instance, let us suppose that an opponent is holding a knife and is about to stab. Theoretical mechanics and neurophysiology suggest that any biomechanical system predicts the next point of support (the fulcrum), that is, he already knows the point of force application. If an opponent stabs in the chest, then it is enough to make a side step. The point of force application (the point of impact) has shifted, and now, in order to deliver a strike one has to change the position of his feet. That is the moment when it is necessary to act, for instance you may strike feet. Obviously, an opponent can be struck only by means of feet and by imbalancing an enemy, in such case, one may not even use the power of hands.

The first thing to start the training – with theoretical understanding that you need to attack at the moment when the position is being changed, and also learn how to work effectively do footwork against a knife. First, without having technical elements, but later on they are going to be indispensable. Also, it is highly important to able to move around in different directions, to master the pendulum system, imbalance your enemy in order to get control of his body.

Let us pay attention to four echelon work: a knife, hand, body and no contact work. When an enemy delivers a knife strike, there is a choice of how to work. For example, you may start using knife right away, wedge in your hand or use your your whole body so that the enemy can not cause any injury, and also one may use no contact work.

Having mastered all these principles, one may proceed to the next stage of working with geometric constructions. If the opponent took out a knife, you need to understand how to proceed. The first thing to do in this case is to hide your hands, meaning they should not be protruded forward, in front of the enemy, as any sensible person is going to attack the nearest point of defeat, and therefore you will get your hands cut. For this reason, one should not use stances which imply keeping hands in front. They ought to be lowered or raised up, or pressed to the chest, depending on what you are going to do next. It is necessary to learn how to carry out rotating movements on the shins, so as not to let yourself be attacked, and so that the stabbing blow passes by. In order to protect yourself from a chopping strike as a part of the training program, one has to learn how to work in diagonal manner. If you are facing a skillful enemy, then it is necessary to know what certain strikes has to be delivered.

Having dealt with geometric constructions which allow you to escape from blows, you need to make your hands and feet work together. It is necessary to understand the echelons of defense and attack. Since usually one carries a knife in his pocket, first thing that should be learnt is how strike an enemy when he pulls out the knife. Since an human being cannot perform two acts simultaneously, that would be the moment to use your feet or hands. Afterwards it is recommended to master blows that can disable an enemy. This is important, since it is important to understand when and how they could be applied: by “wave” type of a move, by turning the body or by mass of the body, which is going to be a mechanism that transmits force through the impact. Consider, palm strokes, they do not require much effort, but there are some nuances, such as the accuracy of the hit itself. It is necessary to bring an opponent in a way that he is in the plane of striking and could not leave it.

While working against a knife one has to understand that the first action should be wedging pr stopping one, that is, you should not allow an enemy to get a knife or strike at the moment when he pulls it out. If an opponent has already pulled out a knife, then you have to cope with it. In order to do this, you have to remember the theory, and you have to be able to work on your feet, to choose a choose a “geometry” in order not to be killed, you should remember the logical model of delivering a strike and all this in total has to be evaluated in one second. However, with this knowledge you can immediately understand where an enemy will strike. Such things have been used since ancient times in the Dvoryanskaya Sech. 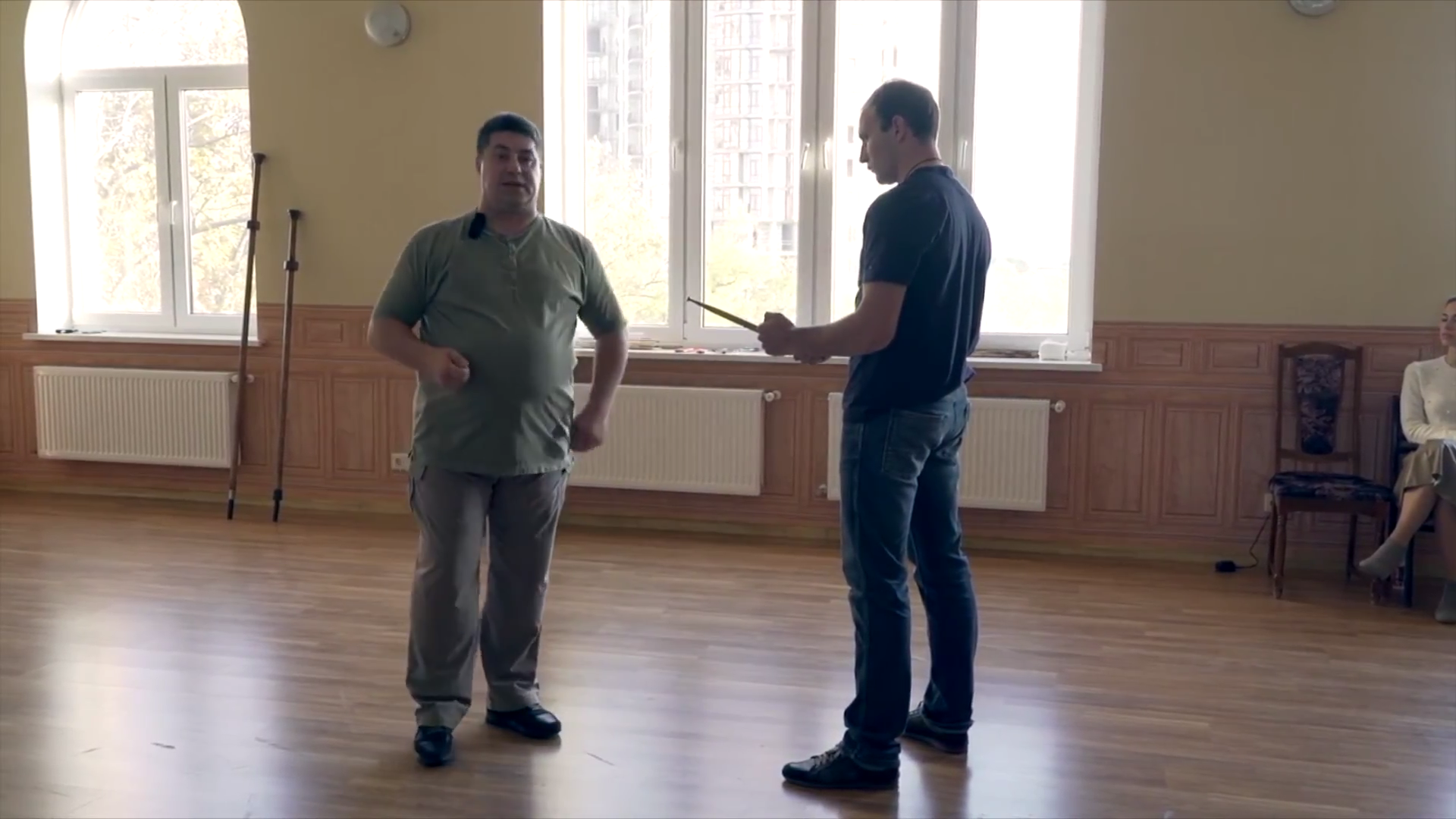 When there is a sword strike, there are some other difficulties which have to be looked at, since a sword is longer than a knife. No matter how you retreat or move the sword will catch up with you anyways. In these cases, usually everything one can do is go forward to the enemy, move left or right, but no retreating. For example, you can work with a sword and with the opponent’s hand, with your own hand like a shield and deliver a with your hand.

After you have mastered the technique of handling the sword, you can go to the next stage, when both opponents have knives in their hands, and they attack you at the same time. This is necessary in order to navigate in space and time, moving on your feet, so that you do not think that you may be attacked only with a knife. After all, a knife can be thrown by means of any trajectory, and it will be necessary to do footwork so that you do not get “hit” with a knife. It is important tactical training and understanding of what your opponents will do. To begin with, it is recommended to understand what is being taught today as a knife fight. On the examples of different schools you can understand how to work against different opponents. It is possible to study the techniques not only of knife fighting schools, but also of bodyguard schools, the work of subversive units and assassination attempts throughout in history.

If you are attacked with a knife in the street, it would be good to look for a way to gain an advantage. Supposedly you may grab a stone or a stick, in such a case an enemy may not longer want to attack. If you are attacked in a restaurant, it is always possible to grab a fork, a knife or other appliances. Never forget about working with improvised items. Knowing what is taught in various schools, even at a person’s desk, you can determine who is in front of you – a fighter or a boxer, and, consequently, the way, how you can work against him. It should be noted that Jiu-Jitsu technique works very well against the knife, as well as a special section of sambo.
It is known that a person is afraid of what he does not know of. When these stages are completed and psychological “locks” are removed, it is necessary to cultivate determination in a person. This is something more than just morally strong-willed qualities. One must be ready to fulfill the task of defeating an enemy armed with a knife.

And here is an important part, which will seriously restrain one in a real combat it is legal preparation. We need to explain to him what is necessary defense, an extreme necessity and component elements of a crime and seriously work with him in the field of law. It is necessary to teach lessons of counter-justice. Only after this one may start developing a determination in a person. There are special exercises and training programs for this, starting from tactical games and ending with visits to unpleasant establishments such as morgue, the presence of an autopsy of the body to see the consequences of knife strikes, etc.

When one has nurtured determination in himself, it is necessary to assemble all the techniques that were learned. Thus a technical system is built on the foundation of law, and everything else is attached to the core of determination.