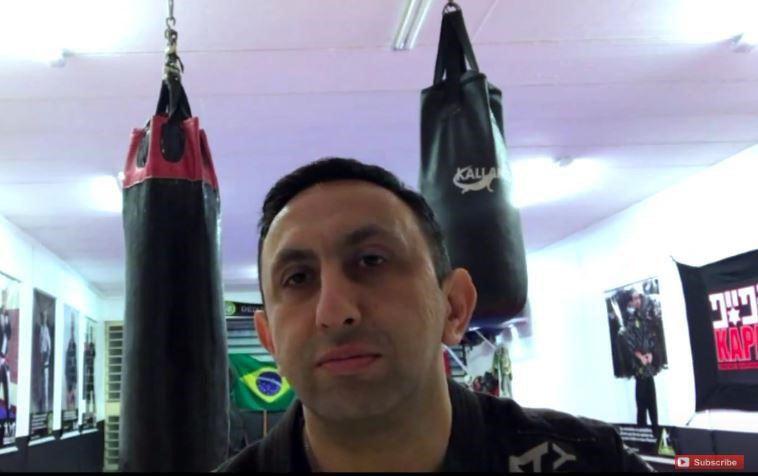 As it is known, Brazil is one of the most criminal and dangerous countries in the world. In order to find out more about the modern criminal tradition of Brazil and the use of a knife, we have decided to turn to the leading instructor of the Brazilian kapap (face-to-face fight) Diogo Duarte. Master has kindly shared his knowledge in the interview with a journalist Marina Saparkina in the Tribune broadcast in the frameworks of "All Truth and Lies about Martial Arts" project, in which we traditionally talk about teachers who influenced the lives of their students.

First of all, we were curious to know if Duarte was training people who work in the prison system, in particular how to cope with criminals. Most of the students and instructors of the school work in the prison system indeed. Usually people come to school not for any specific training program, instead they want to learn self-defense, as the school has a course for the military and police. As for the police themselves, they come to school to learn the ways of dealing with criminals.
Brazil is a huge country, and every region has its own prison system. But in general, we can say that everyone has access to a knife, since this is the most easily extracted weapon. Needless to say, this tool is used primarily with a percussive technique. Prisoners use improvised items that can be found in prison right away, or come up with what can be made of wood, wrap it with a tape to make a stabbing tool.

What about the different knives used by criminal elements in Brazil? For example, the Peixeira knife (Pesheira) is more common in the northern and western regions of the country. People living in the south, gauchos, use other knives more frequently, some call them "Missioneira". They are more common among gauchos. It is very difficult to find a gaucho knife in the north-west of the country, where there is simply no such culture, so there is practically no such kind of knife. We can say that each region has its own specific knives and, in addition, traditional piercing tools that are the main ones in all countries, that is, they are used precisely to stab. This kind of knives do not leave any cutting traces.
If we talk about what is used more often - a firearm or a knife - then, again, it depends on the staff. For example, in the south of the country there are two states - Santa Catarina and Parana, there are rifles used, but not often. And in the state of Rio Grande do Sul guns are very prevalent. In Sãn Paulo or Rio if you meet someone with a gun in the hand only then, apparently, this person is extremely old-fashioned.

Duarte himself was in situations when it was necessary to apply self-defense skills, he worked in the police department, and he had to be in places of high risk. It is extremely necessary to use certain techniques when you see that the suspect is walking in your direction with an intention of causing harm. It is very important to be able to see the conflict in advance and prevent it. For instance, once you are in a new place, you should be attentive and see where you are going. Thus, when Duarte saw that he was coming to a place where something likely could have happened, he simply turned around a block before that place and left. Therefore, the ability to prevent a situation is one of the most important aspects of self-defense. According to the walk and behavior of one person walking along the street, it can be seen that he is not careless and keeps attention to what is happening around, and the other goes with his head down, looks into the phone and does not see what is happening. Robber. Victim. Who do you think he will choose? Naturally, the robber will choose the one who behaves like a victim.
https://www.youtube.com/watch?v=4haNjWdAKUs
Let us talk about knives in prisons. Do criminals use improvised knives? Different objects that they can get there are used as weapons, or they make knives out of it. For example, they take a piece of metal or wood that you can hold in your hands, or use materials that you can reel to hold it like a handle. They can find some piece of metal, sharpen one part of it and wrap it with a tape so that it can be held. Not so often, but it happens that they use a piece of stone and sharpen it. In general, we get improvised weapons. In fact, prisoners in prison establishments have 24 hours for creativity and they are very successful at this.

I wonder if there are any specific types of blows that criminals use in Brazil? For example, it is known that the Sicilian mafia used certain hits. One of them is a strike to the solar plexus. Is there such a strike in the Brazilian criminal tradition? Duarte did not find these kind of similarities, probably because today knife is no longer such a common weapon as it was. For most of the criminals, this type of weapon is a history. If we talk about the points of attack, then most of the hits are delivered to the chest or back, because they are "amateurs". When looking for a victim, they consider this to be the most vital parts of the body, that is why stabbing the chest and cutting the throat are the most common. In some areas, there are cases where criminals cut bodies, they cut off body parts, but this is a demonstration for criminals from another group, which can be seen quite often. This is not some rule or tradition, but a demonstration for others. In fact, in Brazil there are no such professionals in knife fighting, as, for example, in the Philippines. The latter are indeed professionals in this subject.

In general, Duarte believes that training is not about magic. There is the possibility of preventing the situation and the human reaction, thus training is very important. There may be a situation when someone is going to rob you. And the best solution here is to not react at all, because many people died during the robbery just because they tried to do something when it should not have been done. Training is the most important part of human training, it is the process of forming correct model of behavior and understanding, whether it is necessary to react somehow or not. Therefore, if it saves a life, then it's worth it. Perhaps, this is the whole matter of training.